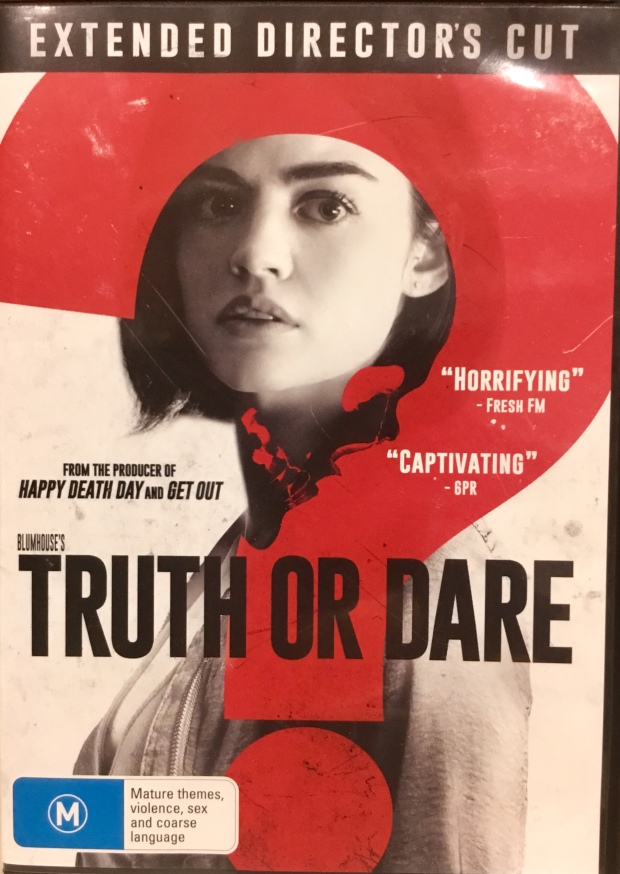 Film: It seems that Wes Craven’s Scream didn’t just save the horror industry in the 90s, it also gave young’s tv stars an opportunity to find their way to the big screen… via horror movies. Every time a new Scream-derivative film was announced, it’s cast was led by someone from a popular Tv show. To be fair, some of the teen comedies were these gateways for these people as well.

Horror Movies, which in the 80s seemed to be the place that either a) people at the end of their careers turned up or b) those prepared to do nudity killed their careers, became a place that soap or drama stars could wind up on the road to a cinema career.

It now seems to be the done thing by actors on the off-season of their TV shows, sometimes to little effect, but other times to some degree of success.

Truth or Dare, co-written and directed by Kick Ass 2’s Jeff Wadlow, features a bevy of these young stars from shows like Pretty Little Liars, Teen Wolf, The Flash and Grey’s Anatomy.

Our story is of YouTuber/ Snapchatter, Olivia (Lucy Hale), who is coerced by her friend’s to go to Mexico for Spring Break, and whilst there meets Carter (London Liboiron) who convinced them all to make their way to an abandoned convent and play a game of Truth or Dare.

The problem is, the game is not what it seems, and anyone that plays it becomes haunted by a demon who forces them into horrible, friend-destroying truths, or self-destructive and violent dares which, if they don’t commit to, will result in them being killed by the demon.

Once stuck in the game though, how can they get out? Is there a way to get rid of the demon, or are they cursed forever?

This film is pretty good, though the ‘thing’ that’s haunting them has a very It Follows way of ‘infecting’ the characters. The actors are all great and likeable and Wadlow’s direction tells the story with a minimum of effects but it still looks great, except for when people are possessed by the demon and their faces just look like a lame Snapchat filter, which is a shame. I think something even lower-tech, like coloured contacts and a voice changer, would have been more effective.

Basically this is an enjoyable film with a good cast that will be forgotten almost as soon as you finish watching it, until in two years time a completely unassociated sequel made by studio guns-for-hire will remind you it exists.

Format: Truth or Dare was reviewed with the Australian R4 DVD which runs for approximately 97 minutes. The image is presented in 2.39:1 with a Dolby Digital 5.1 audio track which is perfect.

Extras: Before the menu starts, there are trailers for Jurassic World: Fallen Kingdom, Tremors: A Cold Day In Hell and Pacific Rim Uprising.

Game On: The Making Of Truth or Dare isn’t really a proper ‘making of’ but instead is a 6 minutes overview of what the movie is about, it’s origins and a few comments from the cast.

Directing the Deaths is an even SHORTER piece which really just describes a couple of deaths in minor detail.

There is a commentary with Wadlow and Hale which is really interesting as each scene is described from the two pints of view and provides a nice overview of what is going on between cast and crew.

WISIA: I’m pretty sure this is gonna be a one and done for me.