Madman’s release of Scream of Fear on Bluray

Film: I have mentioned regularly, not just here (such as in my review of The Nanny) but also in other websites I have reviewed horror films for, that I am a big fan of Hammer films, and that I love some of these earlier, less gory and more psychologically driven thrillers.

This film initially caught my attention for the same reason the aforementioned The Nanny did, it is written by Jimmy Sangster, who did a great job of adapting the book that The Nanny was based upon, but also gave us the Hammer versions of Dracula (in The Horror of Dracula) and The Mummy. It’s directed wonderfully by Seth Holt, who directed The Nanny, but also is responsible for my favourite Hammer film, Blood from the Mummy’s Tomb, which stars the stunning Valerie Leon.

Speaking of stunning, this film stars Susan Strasberg as Penny Appleby, a woman who has an unreasonable fear of everything, and is bound to a wheelchair after an accident where a horse fell on her a broke two of her vertebrae. She is returning home to her estranged father’s (Fred Johnson) house in the French Riviera after not being in too much contact with him for 9 or 10 years, based on an invitation he sent to her.

Upon returning she is picked up from the airport by kindly chauffeur, Robert (Ronald Lewis) who takes her to her father’s house only to find that he has gone away, and she is left in the arms of her step-mother, whom she has never met, Jane (Ann Todd).

The two bond quickly, but Penny starts to suspect something is amiss when she finds what appears to be her father’s corpse sitting in one of the rooms. When she tells Jane and Robert though, the corpse mysteriously has disappeared.

Penny quickly suspects that something is going on, and enlists Robert in her quest for the truth, even though her step-mother, and her father’s friend, Dr Gerrad (Christopher Lee) suggest that maybe she is having flights of fancy… or do they have a more sinister plan in mind…

Filmed in glorious black and white, Scream of Fear is a wonderful example of a thriller. It unfortunately didn’t find much success in the USA but was a hit in Europe and had several imitators, according to Marcus Hearn in his book The Hammer Vault (if you are a Hammer fan, this MUST be in your collection).

The performances are melodramatic as one would expect from a film of this vintage, and Christopher Lee’s French accent is of dubious pedigree, but it really adds to the atmosphere of the film.

More twists than a strand of DNA, this film is a wonderful watch, and will keep everyone guessing almost to the very end.

Format: The version of this film reviewed was the Australian, region B bluray which runs for approximately 82 minutes. The film is presented in a grainy, and occasionally blurry 1.85:1 image with a Dolby Digital mono soundtrack which sounds pretty good. One can’t expect a film of this age to look perfect, but there are many films from this time and earlier which look much better due to various restoration processes.

Extras: None, which is a shame, though considering pretty much well everyone who worked on the film is no longer with us, not surprising. A film of this quality at least deserves some kind of commentary or featurette from Hammer enthusiasts, film critics or other directors who champion it.

WISIA: A beautifully shot film with a stunning lead, not to mention Christopher Lee, but as with a lot of these sorts of films, once the secret is out, the impact of the film is lessened. That, however, doesn’t make it an occasional rewatch pile contender as it is entertaining.

The cover of the Australian Bluray of The Gorgon

Film: Hammer horror films are some of my favourite horror films, and I have been a champion of them for many years, even to the point I once had a letter published in an early issue of Kitbuilders Magazine wondering why there were hundreds of Universal Horror characters available in model kit form, but Hammer horror characters didn’t seem to get much respect from those in the ‘kitbashing’ and resin model kit hobby.

Thankfully those days are gone and those still in that hobby, of which I am no longer one (due mainly to time restraints), have many Hammer characters to choose from.. and perhaps I like to think I may have had a small part in that.

These films have had us see heaps of exposure to wonderful actors like Christopher Lee, Peter Cushing and Michael Ripper and their female counterparts, the so-called Hammer Glamour set, such as Caroline Monroe, Stephanie Beacham and Madeline Smith. The most famous of their films were about Dracula, or Frankenstein, but their forays into other creatures, like zombies, in The Plague of Zombies, or lizard-women, like in The Reptile were also occasionally incredibly entertaining.

Which leads us to this film, The Gorgon.

Paul Heinz (Richard Pasco) has travelled to a small village to investigate the death of his father, Professor Jules Heinz (Michael Goodliffe) and his brother, Bruno (Jeremy Longhurst), who apparently killed himself after murdering his pregnant girlfriend.

The doctor who pronounced them both dead, Dr. Namaroff (Peter Cushing) seems to be hiding something from Paul’s investigation though, which may or may not involve his assistant, Carla (Barbara Shelley), and legends of the mythical Gorgon, Megaera, keep turning up in conversation.

Thankfully, Paul’s mentor, Professor Karl Meister (Christopher Lee) turns up to assist, but can they solve the mystery before either one of them get… ahem… stoned?

Immediately this film is notable as it has Lee and Cushing in it, so Hammer fans should sit up and take notice, and the performances of all concerned are melodramatic, as one would expect. Special note should be made that this film also features second Doctor Who Patrick Troughton as the chief of police, and Prudence Hyman, who starred in other Hammer films like The Witches and Rasputin The Mad Monk. Hammer direction stalwart Terrance Fischer uses his talent to create some great sequences, but the joy stops there.

The story was written by one time movie writer, J. Llewellyn Devine, and developed into a screenplay by yet another Hammer regular, John Gilling, a writer/ director who is possibly best known for another Hammer film, The Mummy’s Shroud. This film, from a story point of view, unfortunately, is little more than a derivative of a werewolf film, with the big mystery being WHO is the normal person who changes, and that is telegraphed so early you could turn off the film at the 20 minute mark and know the result.

That would be a shame though, as the Gorgon make-up is magnificently cheesy.

In effect, it’s not that is a bad film but from a story point of view, it’s just disastrously generic, and bereft of surprises.

The Gorgon Madman Bluray menu screen: no extras for you!

Format: The reviewed copy is the Australian region B bluray, which runs for approximately 1 hour and 24 minutes, and is presented in a quite clear 1.75:1 image with a decent Dolby Digital Mono audio

WISIA: Tragically, this is probably a Hammer film I won’t revisit just because the story is done so much better by so many other werewolf films, even though this isn’t a werewolf film. 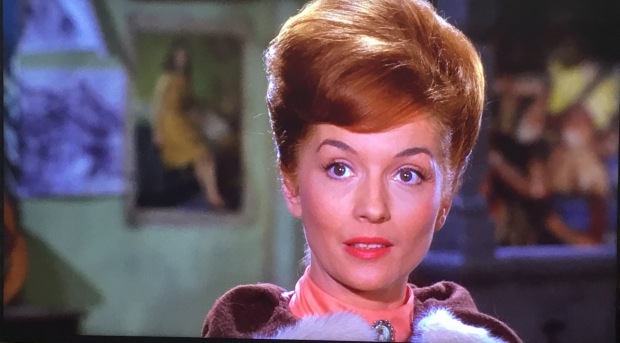 The Gorgon: Barbara Shelley as Carla