A better weekly update of stuff this week with a great variety of stuff imvoleved, but first a small note. These weekly updates started on the Nerds of Oz website, but that is exclusively going to be for the podcast list from now, so technically this is the first TWP weekly buy update! 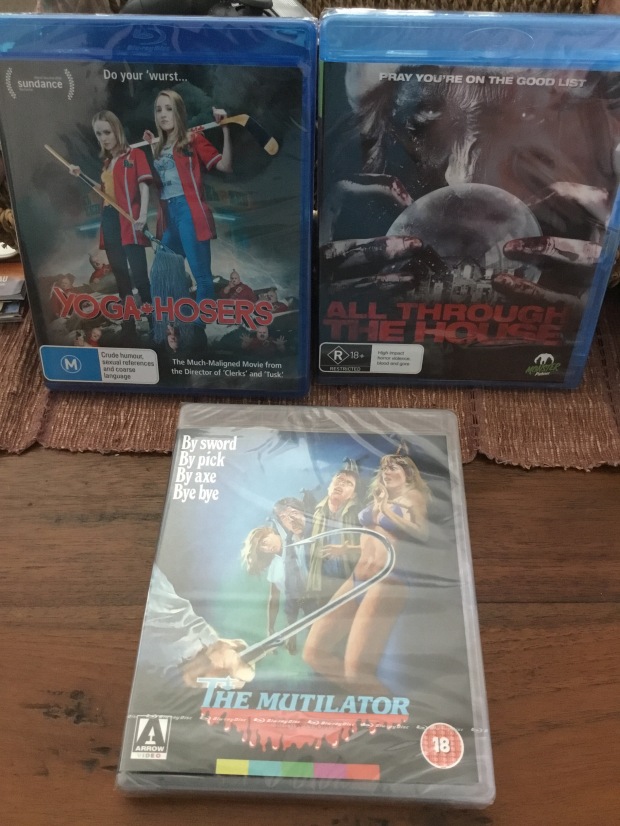 The Mutilator from Arrow Video. Arrow video rarely disappoint, and I hope this will be just as trashy and slashy as their usual output!

All Through the House from Monster Pictures. Monster occasionally disappoint but I like how regular their output is and the price is occasionally right so I am prepared to give them the benefit of the doubt more often than not. Review coming soon.

Yoga Hosers from Reel DVD. Kevin Smith’s last few bits of output didn’t impress. His segment in ‘Holidays’ was the worst of them, and Tusk failed to entertain. I’ll be interested to see how this pans out. Review coming soon. 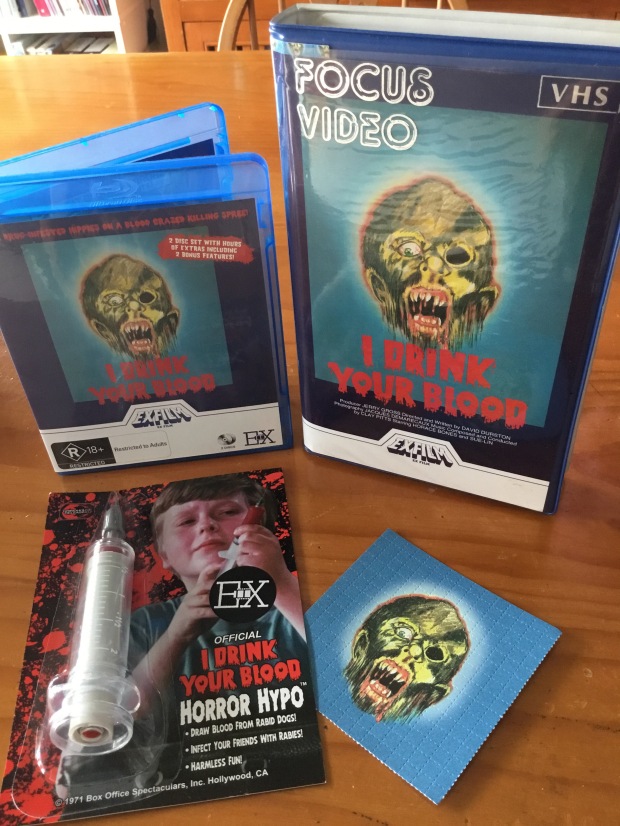 Last is an Australian bluray release of cult classic I Drink Your Blood! This limited edition comes with a repro of the VHS release, a ‘horror hypo’ and a sheet of I Drink Your Blood LSD sheets. Best thing about this release is it also comes with the films I Eat Your Skin and Blue Sextet! I love this film just because the exquisitely beautiful Lynn Lowry appears an a mute hippie!

Watchdogs 2 from Ubi-soft. I liked the first one but wasn’t going to worry about this, but when EB Games discounted the edition with the statue, I leapt on it. I’ve played about 30 minutes, and totally dig it, though like with all video games, I’m not very good at it. 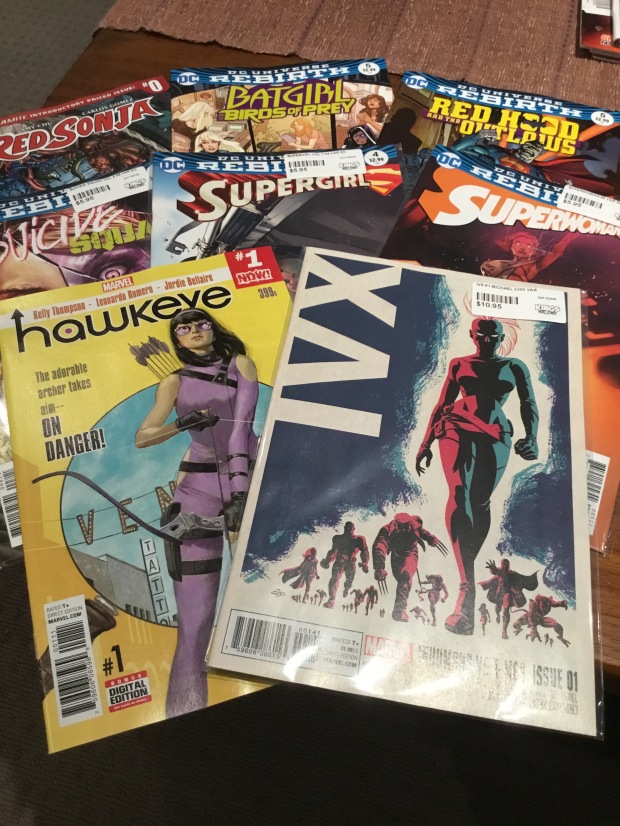 I haven’t quite gotten to read everything I grabbed this week, so some of these comments are about the art only, my apologies to the writers! I’ll point out which ones I managed to read before the blog post was published with a big ‘READ!’ before the comic’s comments.

READ! Red Sonja #0 from Dynamite.I’ve always loved Marvel’s re-do of Robert E. Howard’s Russian revolutionary character into Conan’s world, and the quality of art continues with this Dynamite collection. Unfortunately the story is a ‘person from the past gets sent to the future’ story, which is a bit generic, but if it opens some new opportunities for the character, I’ll at least give it a go.This was a ‘cheaper’ comic with not quite a full story, but with some cool sketchbook pages, and a buttload of adds!

READ! Batgirl and the Birds of Prey #5 from DC Comics. I’m really liking this series, and the fact it contains three of my favourite DC heroines doesn’t hurt. The quest for who is the new Oracle continues: it’s some really nice art with well written banter. Huntress has become particularly funny with her ‘should I kill him/her’ attitude.

Red Hood and the Outlaws #5 from DC Comics. I can’t comment on the quality of the writing in this series yet as I’ve not yet started reading it, but conceptually, the idea of a second rate Batman (in Red Hood), Wonder Woman(in Artemis) and Superman (with Bizarro) is both intriguing and hilarious. The art by Dexter Soy is solid too.

Suicide Squad #8 from DC Comics. Its Suicide Squad, and I have loved the Suicide Squad since the 80s when I first started reading it, and I grabbed the awesome alternate fractured Harley cover, so definitely loving it!

Supergirl #4 from DC Comics. I’m loving the TV series, so I thought I’d give the Rebirth Supergirl a go, just for nostalgia’s sake.

Superwoman #5 from DC Comics. I’ve never picked up an issue of this so I can’t make a comment on it at all yet, but this was bought due to the Supergirl TV series high as well!

READ! Hawkeye #1 from Marvel Comics. The re-sexing-of Marvel comics continues… only joking. I liked this character from the Young Avengers comics from a few years ago, and like the style of this comic. It’s a sweet mix of Alias, Veronica Mars and the New 52 Batgirl, and that ain’t a bad thing! I like the low key art, realistic with a David Lapham swagger to it, and the story is told efficiently with some smart dialogue.

IVX #1 from Marvel Comics. Inhumans versus X-men is the new big thing for Marvel this season… I am wondering if they aren’t going to squeeze the X-men into a bunch of solo comics so the films don’t have to acknowledge their existence until Marvel movies regain control of the license. I will say though, a Marvel Universe with no Fantastic Four is no Marvel Universe in my books, not properly!

The Art of Star Wars: Rogue One from Abrams. I can’t talk about this at all as I don’t open books about films until I’ve seen the film, so I’ll just say the price was right ($55 from Harry Hartogs) and it’ll look nice with my other ‘art of’ books.

Normally I’d divide this up into it’s individual bits, but it’s ALL Assassin’s Creed so I thought I should share it! First is the book of the film, which I normally don’t open, like I said with the Rogue One book, but I couldn’t help but open this. It has some amazing pics from the film, and appears to be quite text heavy, so let’s hope it’s packed with information!

Next I have a couple of AC scotch glasses… I’d better start drinking scotch! 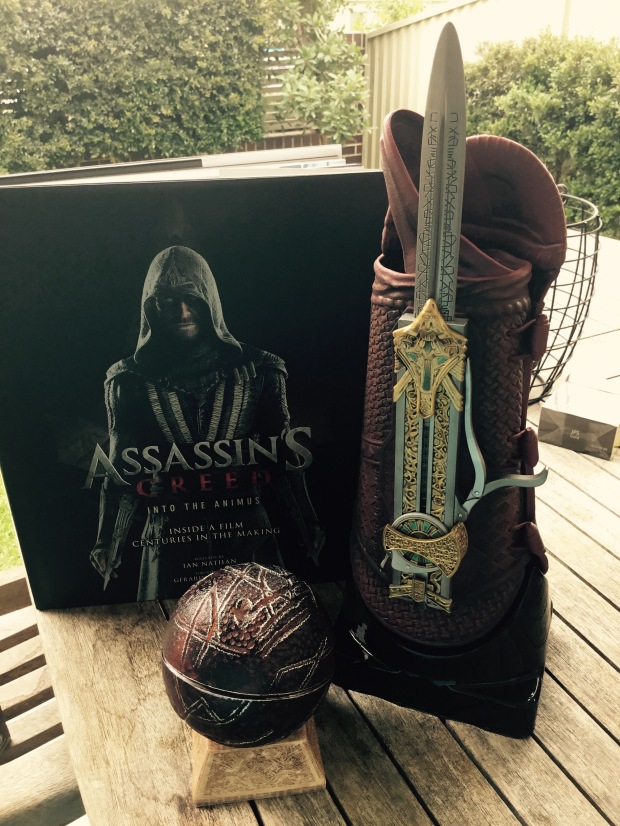 Lastly a couple of cosplay/ role play bits. A pretty cool Hidden Blade and a fancy Apple of Eden. Normally I would buy roleplay/ cosplay stuff but these are pretty cool!