One from the to watch pile…
Batman The Killing Joke (2016)

Film: Batman has never been my favourite superhero, but he’s always been right up near the top. His parliament of villains though, are unsurpassed by any other comic. Characters like Two-Face, the Penguin, Killer Croc, Catwoman and the Joker in different circumstances are Travis Bickle, The Godfather, Hannibal Lector, Lisbeth Salander or Freddy Kruger; since the 80s, the writers of Batman have always given a real cinematic personality to Batman villains.

Specifically this has happened since the 80s because of three comics that took the childlike elements of comics, and made them for adults. These comics all came from DC because in those days, Marvel weren’t anywhere near the same page as DC in terms of understanding that there were now adults who had been reading comics since they were kids and they still waded in the kiddies end of the pool. DC though, struck out with three comics that changed the face of comics: Watchmen, The Dark Knight Returns and the comic that this DC animated feature is based on The Killing Joke. 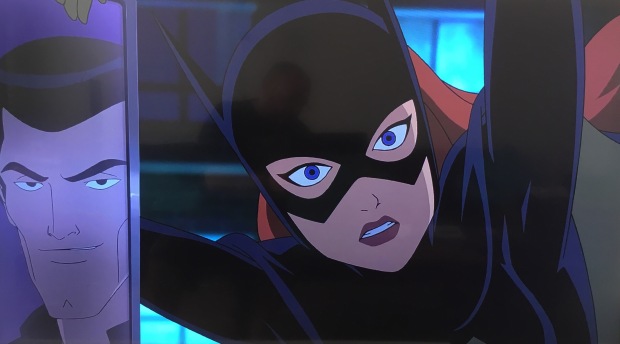 The Killing Joke specifically is a Batman/ Joker story and explores not the differences that they have always shown… The good/bad dichotomy… But instead the similarities of their psychoses.

The Killing Joke introduces us to Barbara Gordon aka Batgirl, a sidekick who also has somewhat of a crush on him. We explore her and Batman’s relationship in the first act with an investigation into a mobster, and how it grows into something more that just a professional relationship.

After we get that relationship down, we lead into the real horror story which is of the Joker on the loose in Gotham City, and when he maims Barbara and kidnaps her father, Commissioner Gordon, Batman’s investigative powers go into high gear… As does his need for revenge…

In and amongst this story, we get a glimpse into the origin of the Joker… Or one of the many origins he claims, anyway.

The animated version does have a slight difference in the story from the comic, in that they have included more Batgirl as an introduction so what the Joker does to her has more gravity to someone who may enjoy these movies, but don’t necessarily have a large volume of DC Universe knowledge running through there skulls. Within the confines of this feature it works well, and the actual comic itself probably would have been far to short for a feature over an hour, so it’s a welcome addition, though there is clearly two completely separate acts. The thing I found real interesting is that obviously Moore’s resistance to his stories being translated into film or TV have resulted in his name being completely removed from the credits. I can’t say whether this is upon his request or DC’s, but I assume the former is the truth.

This film received a lot of criticism about the relationship between Batman and Batgirl, but I don’t think it’s as bad as they say, and doesn’t really vary from Batgirl’s origins. Almost every incarnation of the comic version of the character have had Barbara become Batgirl due to an obsession with the Dark Knight, and to have her act in that obsession isn’t completely unreasonable. Also, the character has always been of varying age, sometimes she’s a university student, so maybe 18 to 22, or working in a library, and not an ingenue librarian either, but an established one, so we are talking mid 20s to 30… These ages aren’t unreasonable to have a sexual liaison with a man in his late 30s to early 40s.

The animation is great, and lies somewhere between TV animation and a Disney feature, but it does emulate Killing Joke comic artist, Brian Bolland’s art satisfactorily, but obviously, and those that know Bolland’s work will appreciate it would be difficult, not exact to his style. It does replicate his layouts and animates them efficiently.

The voice acting is perfect and reuses the Batman regulars Kevin Conroy as Batman, Mark Hamill as The Joker and Tara Strong as Batgirl, and they all complete their roles perfectly. Hamill’s Joker particularly has a comic psychosis too it that is truly disturbing.

I thoroughly enjoyed this take of The Killing Joke, and look forward to, considering the post-credit sequence, a Birds of Prey animated film sometime in the future. Batgirl has always been a favourite of mine, and this was a great introduction to the character!

Format: The review copy of this film was the Australian region B bluray which runs for 72 mins and is presented in an immaculate 1.78:1 widescreen with a Dolby digital 5.1 soundtrack.

Extras: These DC animated features almost always have a bunch of features, and The Killing Joke is no exception.

The disc actually opens with a trailer for Batman Vs Superman: Dawn of Justice and an ad for the DC Season Pass, which incorporates all the DC TV series’s currently airing like Supergirl, Gotham, Arrow, The Flash and Legends of Tomorrow.

Then we get into the REAL extras, which include trailers for the animated feature Batman: Bad Blood, the film Suicide Squad and the DC All Access App.

From the DC Comics Vault has two cartoons: ‘Christmas with the Joker’ from Batman: The Animated Series and ‘Old Wounds’ from The New Batman Adventures.

We also have Sneak Peeks of their next animated movie, Justice League Dark, and previous releases, The Dark Knight Returns Part 1 and 2 and Assault on Arkham.

Madness Set to Music talks to the composers and cast who worked the score of The Killing Joke.

Batman The Killing Joke: The Many Shades of Joker is a character dissection of the Joker. 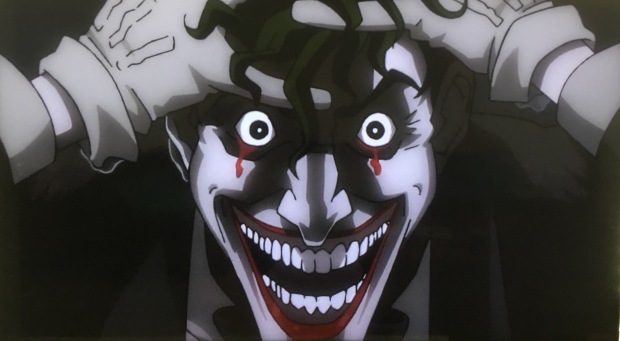 WISIA: I really love these animated DC features and they always get watched again just because they are so much better than any comic based live-action film, DC, Marvel or otherwise. They don’t feel they need to retell origin stories over and over, and just tell the tale of heroic deeds and villainous acts.

Sadly, the TWP has to report today the death of multi Eisner Award comics writer/artist Darwyn Cooke, who has passed after a fight with an aggressive cancer, aged only 53.

Darwyn Cooke gave us the magical DC: The New Frontier which took the DC universe back to the 50s/ 60s, which his art style, a combination of Archie comics and Fleischer Superman animations, suited perfectly. The story was wonderful and was a who’s who of the DC Universe. The comic won multiple Eisner, Shuster and Harvey awards, and when re-released in the ‘Absolute Edition’ collected format, won another award for Best Graphic Album. 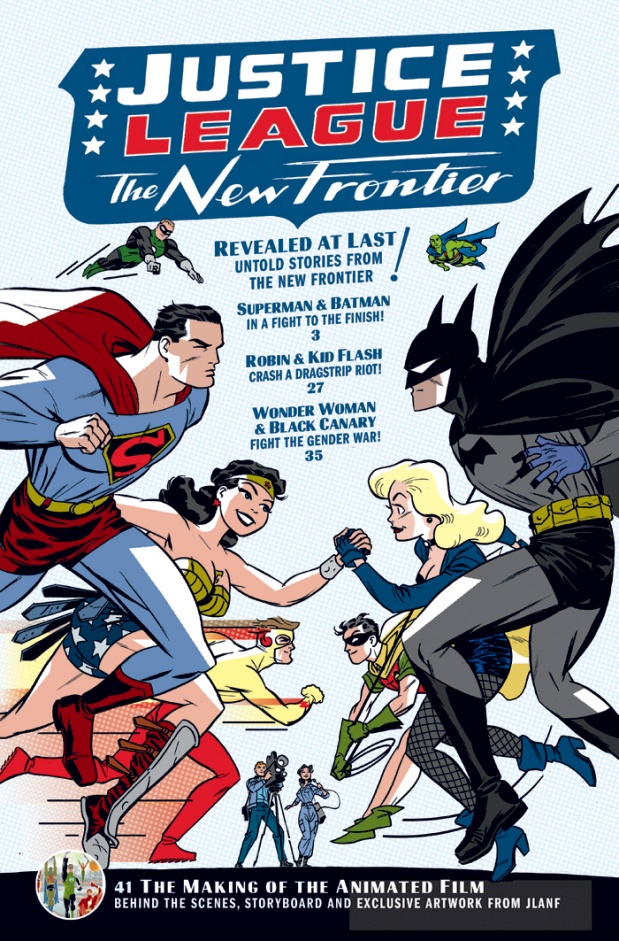 The series was also adapted in DC’s original animation series as Justice League: The New Frontier, which was magnificent: certainly one of the best of the series.

He was also given the task of creating essentially unwanted stories of the Watchmen which were to be prequels to the Alan Moore/ Dave Gibbons tale. I originally had no interest in this idea, but his work on theses series was spectacular.

I am not a convention guy, and don’t live in the US so I never got the chance to meet Mr. Cooke, so my appreciation can only come from his words and pictures. His stories were always an fantastic read, and when mixed with his artwork, they became almost disconcerting as the art always showed an element of fun: I always felt like his characters were having the time of their lives in every single panel, even when looking grim, I still had a feeling they were thinking, like some kind of deranged puppy ‘I’m a superhero, I’m a superhero’.

Of course, these were only two of Mr. Cooke’s works, and I can’t suggest everything he has done, but please, research his name and track done any of his work: you won’t be disappointed.

Sadly, we comics fans will never get to experience that joy again, and the TWP would like to pass on it’s condolences to Mr. Cooke’s family and work colleagues.

Please do two things today: hugs your families and make sure they know they are loved as life is far too short, and please, if you have some spare cash, make a donation to one of the many cancer research charities. Cancer is a scourge, worse than any Lex Luthor or Joker, and  the TWP would like to suggest a charity dear to our hearts, Bear Cottage:

and remember, it’s not how much you give, just that you have given.