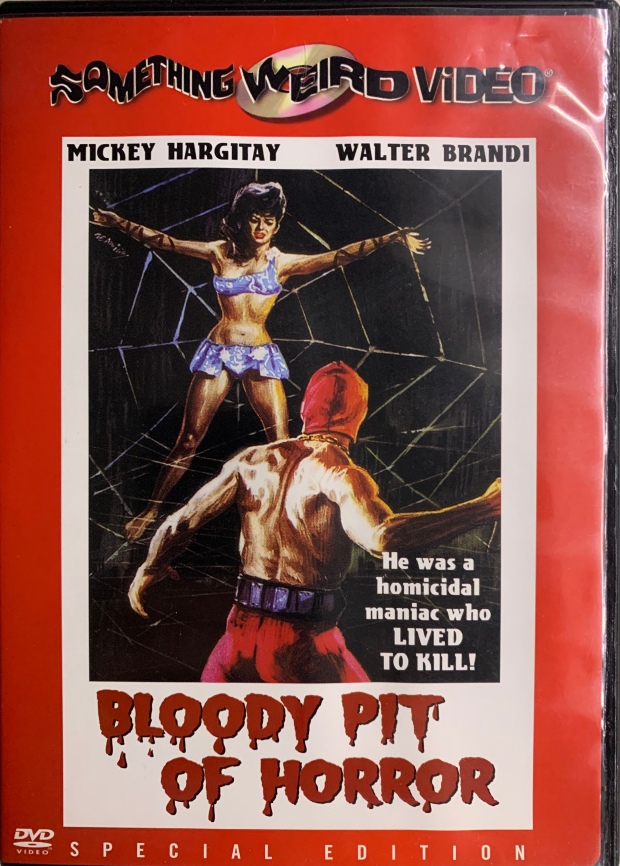 Film: Honestly, I never been able to figure out if Something Weird Video never fail to hit the mark, or miss the mark. I guess, in the ‘so bad it’s good’ stakes, they can comfortably do both! Either way, you know with Something Weird Video, you are going to get something unexpected and that you possibly haven’t seen before.

With this release The Bloody Pit of Horror aka Il Boia Scarlatto written by Robert McLoren and Robert Christmas (aka Romano Migliorini and Roberto Natale respectively), and directed by Max Hunter (aka Massimo Pupillo), Something Weird seem to take a step back and give us something that feels a little more like regular horror, even though it boldly claims to be based on the writings of the Marquis De Sade himself!

Book publisher Daniel Parks (Alfredo Rizzo) wants to create new book covers for author Rick (Walter Brandi) and so has taken a photographer, Dermott (Ralph Zucker), his assistant Edith (Luisa Baratto), and a bevy of attractive models (played by Rita Klein, Barbara Nelli, Mia Tahi and Femi Benussi) and their male counterpart (Nandi Angelini) to what they think is an abandoned castle.

They break in and quickly find it isn’t abandoned, but instead it is inhabited by a retired actor, Travis Anderson (Mickey Hargitay) who coincidently is Edith’s ex-fiancé! He initially rejects their proposal to photograph in his house but after seeing Edith, allows them one night… on the condition they don’t go into the dungeon at all!

You see, many years ago a cruel torturer named The Crimson Executioner, was executed in that very dungeon, and maybe, just maybe, if his spirit is disturbed, he’ll wreak bloody vengeance…

This film is like a saucy TV special ripping off a Mario Bava film. It has a bit of the charm of a Bava film, just a pinch, but without maybe the technical skill that Bava was able to achieve. It has fight scenes straight out of the Adam West Batman TV show (minus ‘BIFF’ and ‘SHLOCK’ of course) and torture scenes where the female cast.. well, sound more like they are into it.

By the way, I have to thank this film for introducing me to a crime I’d never heard of before… ‘deliberate murder’! 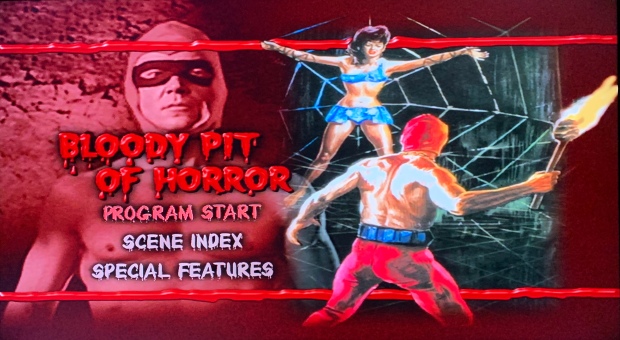 Format: The Bloody Pit of Horror was reviewed on the Something Weird Video region 1 DVD which was released about 20 years go, which means the image isn’t great. It’s presented in a 1.85:1 image which is clear, but contains artefacts but no so many that it’s unwatchable. The audio is presented in Dolby Digital Mono and does the job, but it won’t strain your sound system.

Extras: Something Weird Video always provide interesting and, well, weird extras. This DVD is no different.

Deleted Footage from The Bloody Pit of Horror is just that. Some deleted scenes and an alternate opening.

Except from Privative Love featuring Jayne Mansfield and Mickey Hargitay which is a bizarre song and dance sequence from the film Primitive Love, aka L’amour Primitivo, a film from Luigi Scattini.

Except from Cover Girl Slaughter is apparently a part of a documentary about the women and men who are photographed for the covers of the pulp ‘true crime’ mags of the mid 20th century. I’m not sure if how much of a ‘documentary’ it was.

Bloody Pit of Horror trailer. What it is is what it’s called.

Gallery of Exploitation art featuring Horrorama Radio-Spot Rarities is a cool collection of poster art from exploitation movies, with radio adverts for OTHER film played over the top.

WISIA: It ticks all my boxes so yeah, it’s getting rewatched!