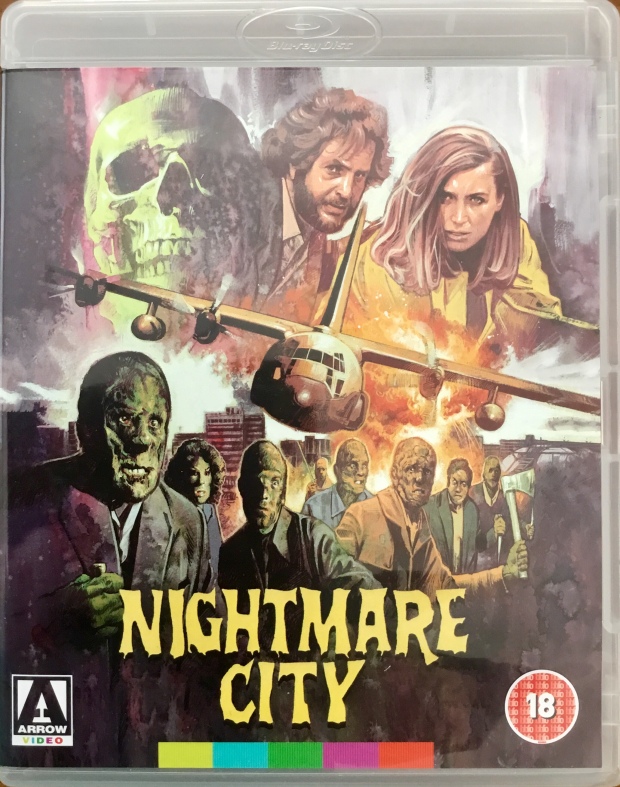 Film: We have SO much to thank George A. Romero for. Not only did he give us a bunch of amazing films that have risen above their lowly horror roots, he also generated an entire horror sub-genre that has become so popular it not only appeals to horror fans, but the general public are totally into it as well, as can be seen by the popularity of TV shows like The Walking Dead and even events like the annual Zombie Walks that several cities worldwide get involved it.

After the splatterfest that was Dawn of the Dead in 1978, every producer was looking for an avenue to deliver a zombie movie down, and Italian director, Umberto Lenzi (The Cynic, The Rat and the Fist) was offer a small script to produce.

He realised this script was too short for a feature and didn’t want to just produce a zombie movie that emulated Romero’s, so he created a world where human beings (not zombies) who suffered from nuclear radiation poisoning would end up with a blood disorder that required them to consume the blood of the Living to survive. His ‘zombies’ were more ‘nuclear vampires’.

The story starts with a mysterious airplane landing with no advice to the control tower as to their identity. Dean Miller (Hugo Stiglitz) is a reporter at the airport who goes to deliver a story as to what this mysterious plane is, but when it lands, he, and a bunch of incompetent soldiers, find that the plane is full of these nuclear vampires, who immediately go on a spectacular, unstoppable rampage which doesn’t stop when they are all killed as everyone they bite gets irradiated and turns into another nuclear zombie.

The military, led by General Murchison (Mel Ferrer), is trying to keep a clamp on this news getting into the general public’s hands, but the wave of monsters is seemingly bottomless, and the threat increases exponentially.

Will humanity survive this horrible invasion, or was it just a horrible dream?

This film is dumb. Dumb, dumb, dumb, but so enormously watchable because of that. The script is terrible. I remember once reading an article about the economy of cinema and how every scene should move the story forward and if it doesn’t, it should be excised from the script. This film has a weird discussion about a work of art that has absolutely no payoff.

The vampire’s motivations are odd as well. They seem to be smart enough to fly a plane, use a gun, even cut a phone line, but are easily distracted during an important feeding session by a new victim, even though they haven’t ‘finished’ the victim they have off… maybe the love of the hunt is just as important to them and the actual catch.

All in all it’s a pretty stupid film that is so bat-guano crazy at times that it’s hard not to like it. Give it a go. 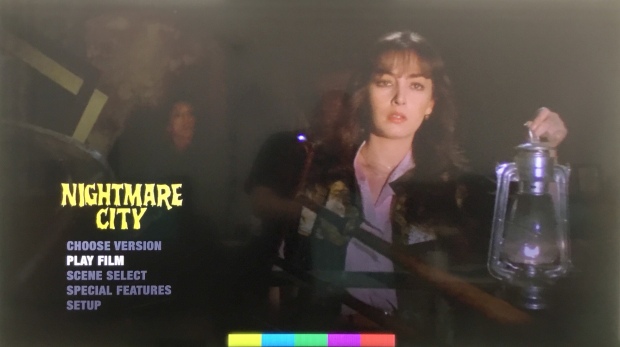 Format: On this Arrow Bluray release, there is two different versions of this film, the original negative version and the dupe, both are present in 2.35:1 and neither are perfect. The dupe is not very sharp and the negative transfer has several spots where the image has stains on it, but both versions are entirely watchable. The audio is presented in a mono 1.0 and again, isnt fantastic but clear enough.

Extras: There’s a great amount of extras on this disc:

There is an interview with Umberto Lenzi which is quite informative, about the production of the film, and how is well-known zombie film, is NOT a zombie film at all!

Maria Rosario Omaggio is also interviewed on this disc and to assist in her English she reads a charming letter to horror fans that she previously prepared.

Hostel and Cabin Fever director Eli Roth talks about the importance of Nightmare City within the history of cinema.

The Limits of Restoration explains the difference between the a negative transfer and a dupe reversal transfer. It is just a text extra with examples, but an interesting look at a process I knew absolutely nothing about! This is accessible here and on the main menu when you are able to choose which version you would like to watch.

There is a Trailer for the film and alternative opening credits, which has the title Attack of the Zombies!

Finally we have a commentary by ex-Fangoria Horror Movie Magazine editor, and Uwe Boll’s punching bag, Chris Alexander, who doesn’t in any hold this film in any way precious, so he’s very honest with his interpretation of it which makes for an amusing commentary.

The Arrow release also has a cool reversible cover, and an interesting booklet on the inside featuring an essay y John Martin, author of the book Seduction of the Gullible.

WISIA: It’s as dumb as a box of hammers but it has enough charm to make it a repeat viewer.