One from the re watch pile for Zombruary…

Film: I have to admit to being a pretty huge Robert Rodriguez fan. There is something about the hot Texan look and the cool not-really-70s vibe that really resonates with me. I am neither old enough nor have I ever lived in American, so the whole Grindhouse experience isn’t really one of mine, but being a teen in the 80s, I get how a film can seem more violent or sexy from the ‘dirtiness’ of the image.

According to Rodriguez’s forward in the book ‘Grindhouse: The Sleaze-Filled Saga of an Exploitation Double Feature’, he came up with idea of a double feature before he filmed Sin City, but put it on hold until he presented the idea to Quentin Tarantino. Tarantino loved the idea and eventually the two decided to of make two brand new films that were made to look like 70s exploitation flicks. Those two film became RR’s Planet Terror and QT’s Death Proof as tragically the experiment failed, and the distributors, the Weinstein Brothers withdrew it from release, only to release each film as single feature, double disc blurays, this one being Planet Terror. 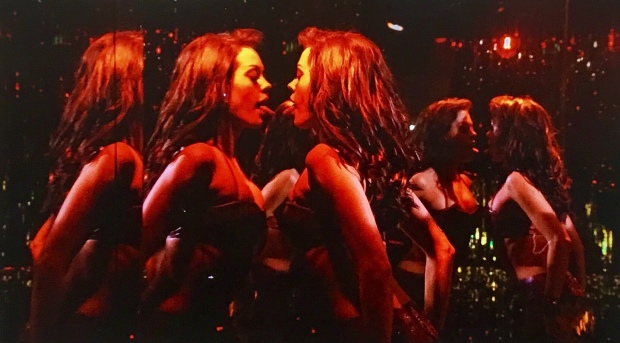 Planet Terror tells of scientist Abby (Naveen Andrews) who releases a bio-chemical into the atmosphere when he is double-crossed by Lt. Muldoon (Bruce Willis), a marine with whom he has been supplying the same drug to, which has been used to keep at bay horrible mutations. The chemical infects almost everyone it comes across, turning them into bloated, pustule covered flesh eating zombie-things. A ragtag group of survivors, including mysterious El Wray (Freddy Rodriguez), Go Go dancer amputee Cherry Darling (Rose McGowan), sexy Doctor Dakota Block (Marley Shelton, doing her very best Barbara Crampton in From Beyond impression), tough guy police officer Hague (Michael Biehn), his brother J.T. (Jeff Fahey) and several others use any abilities they have to find a way to get away from the town, coming not just up against the zombies-things, but also the marines, and even worse, fighting amongst themselves! Will they make it to safety? Only time and a LOT of firepower will tell!!

There is no doubt this film is a fantastic piece of gore laden horror. The story is a pure eighties ‘bio-chemical weapon’ story, like The Return of the Living Dead, but with the visuals of a Lucio Fulci pic. The soundtrack is an interesting one, with Carpenter like synthy bits mixed with RR’s Mexican influence guitar pieces. From the opening scene, which is like a C-cup version of a Russ Meyer’s filmed Go-Go dance, this film has you entranced. Every line is pure Rodriguez in top form.

Rodriguez’s use of the ‘Grindhouse’ effect is interesting as well, the intensity of the artificial ‘print damage’ gets worse in more intense scenes, adding both to the tension of the scene, and also bringing back memories of watching old VHS tapes where the tape was stretched and distorted over excessively sexy or gory bits, from where previous viewers watched that bit over and over again or paused to have a good look at boobs or blood. Another highlight of the ‘Grindhouse’ effect is the so-called ‘missing reel’ which has a saucy sex scene jump to another scene that looks like it takes place a good ten minutes later, which makes the viewer feel like part of the ‘What happened?’ factor. 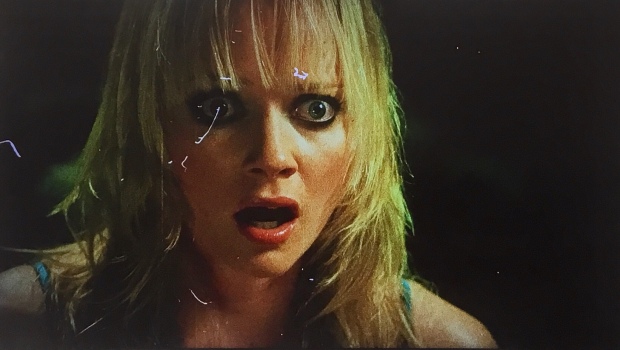 Of course, this film is probably best known for the iconic image of Rose McGowan, who is fantastic in this, with the machine gun prosthetic leg. She’s been in a lot of stuff, but that silhouette will remain a Hollywood icon for years.

When I first saw this film it sent me to a place that only 70s and 80s gore films send me to, so I suppose the experiment, for me, was a resounding success. I couldn’t tell you how many times I’ve enjoyed it.

Format: This film was reviewed on the American region free Bluray which contains an awful artifact-y 1.77:1 presentation that is covered in all sorts of hairs and cigarette burns: it jumps, has telecine wobble and the color drops out more than once… but it is supposed to be like that, so I guess it is perfect!! Like the picture, the sound is imperfect and is filled with little crackle-y bits, but it’s SUPPOSED to be like that! Presented in Dolby 5.1 surround sound.

Extras: As usual, Robert Rodriguez has a well-stacked pantry of extras on this Bluray.

Disc 1 opens with one if the ‘fake trailers’ that were to site inbetween the two films when packaged as Grindhouse. This fake trailer, Machete, of course has since become an action film in its own right, with a sequel!

The first extra is the ability To Watch the film in a “clean’ version that doesn’t have any of the scratches and stuff on the screen. Honestly I don’t know why you would watch the film like this.

Feature Commentary by Robert Rodriguez is as you would expect a commentary by Rodriguez. He is passionate about his work, and presents a detailed commentary on all aspects of the filming of Planet Terror (occasionally repeating himself from the extras).

The Audience Reaction Track is a feature length track that plays the audiences reaction during a showing of the film along with the actual soundtrack…. Like seeing the film ‘live’. Rodriguez did this with Sin City as well, and it is certainly a great way to watch a ‘Grindhouse’ movie. My favourite part is the audience’ s reaction to the appearance of Bruce Willis!

10 Minute Film School is one of Rodriguez’s usual extras, and shows how he did some of the effects for Planet Terror using both live action and cheap methods. This extra is a great tool if you are a tragic wanna be film director.

The Badass Babes of Planet Terror tells of the female casting choices of the film. There are interviews, and interesting anecdotes from Robert Rodriguez, Rose McGowan, Marley Shelton, the Crazy Babysitter Twins and Stacy Ferguson.

Casting Rebel is a short bit about the casting of Rodriguez’s son Rebel in a main role. Shelton, Brolin and Rodriguez all discuss his abilities.

Sickos, Bullets and Explosions: The Stunts of Planet Terror is all about the big bangs and multiple mayhem of Planet Terror. This is an interesting look at the stunts and features interviews with Stunt Supervisor Jeff Dashnaw, with additional comments from Rodriguez, McGowan, Shelton and F. Rodriguez.

The Friend, The Doctor and The Real Estate Agent is a pretty funny piece about the casting of Rodriguez’s friend Tommy Nix, his doctor, Dr. Felix Sabates and his realtor, Skip Reissig.

WISIA: I’ve watched this so many times I can practically recite it.