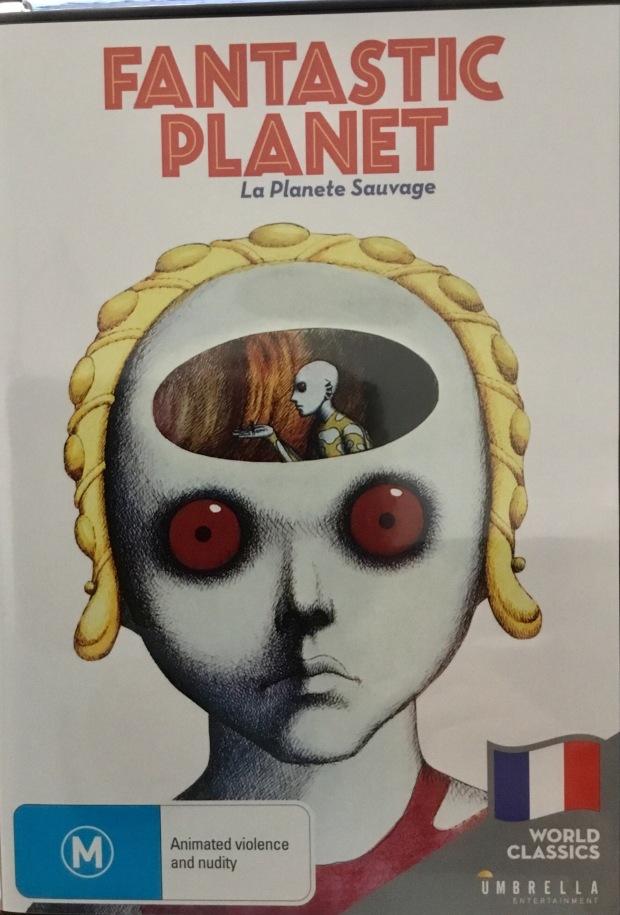 The cover to the Umbrella Entertainment DVD

Film: In my stupidly overlarge collection of books about films, I regularly go back to the 1,000 Movies You Must See Before You Die, and this film is always present in the list.

This animated film was directed by French director René Laloux, and was animated by an all-female group of animators called ‘animatrices’, the production starting in Prague but eventually moved to France due to Communist authorities who were in power at the time.

Apparently this film was inspired by the Russian invasion of Czechoslovakia in the late 60s (I know this as it is written on the back cover of the DVD) but I won’t make any commentary on that as my understanding of politics and non-Australian history is somewhat lacking, and anything I may say would be superficial and I don’t wish to insult people based on a subject I know nothing about.

I like movies, and whilst I appreciate some have subtext and meaning, I’m not one to comment on something of which I know nothing about.

Based on the book Om En Série by Stefan Will (a pen name of Pierre Pairault, writer of La Mort Vivant amongst others), Fantastic Planet tells of a planet inhabited by the Draags, a gigantic race of blue beings whose appearance may be slightly similar to ours, but whose existence is completely alien.

Also on this planet is a race identical to ours called Oms. Oms are kept as pets by the Draags, and our story tells of a young Draag, Tiwa, who has an Om of her own whom she calls Terr.

Like any young girl, Tiwa dresses up her pet and loves him dearly, but Terr isn’t like other Oms. Terr listens in on Tina’s school lessons, learning all he can about everything to do with the planet.

Terr has some creature make him new clothes.

As Tiwa gets older, she grows out of her playthings and Terr decides to run away, taking with him an educational headset, which to him is huge, so he can learn more about the world. Quickly, Terr meets up with a tribe of wild Oms and with his knowledge becomes a full fledged member, but will his knowledge bring revolution, or destroy the Oms altogether?

The Oms gets an education from a Draag device.

The visuals of this film are amazing. Each frame looks like it is straight out of a comic as there is depth to the pencil lines, and a beautiful watercolour element to the colour tones. The animation is a little clunky, but the artistic style overpowers that and the overall result is a treat.

How alien the planet is is wonderful too. The creatures are horrifyingly different to most modern science fiction art styles, and look more like they have been torn straight off a 1920s issue of Weird Tales cover. They are all a delight to behold though.

This film is nothing short of beautiful and is well worth the award it received at the 1973 Cannes film festival. It’s slow paced but the visuals and score make it a fascinating watch. It’s said to be a precursor to the work of Studio Ghibli and with its unusual pace and innovative art design, I can’t argue with that.

A rare sighting of a What-the-hell-is-that?

Format: This Australian Umbrella Entertainment all-region (NTSC) DVD release of the film runs for approximately 72 minutes and is presented in a clear 1.66:1 image with a decent 2.0 audio track. The audio track is available in either French or English, but without a menu it can only be changed via your player’s audio options. I couldn’t turn off the subtitles though so in English that did become distracting when the dialogue was different.

Extras: Not a skerrik, I’m afraid… not even a menu!

WISIA: I think I am going to have to watch it a few times just for the beauty of the artistic style of the film, but maybe not so much after that. 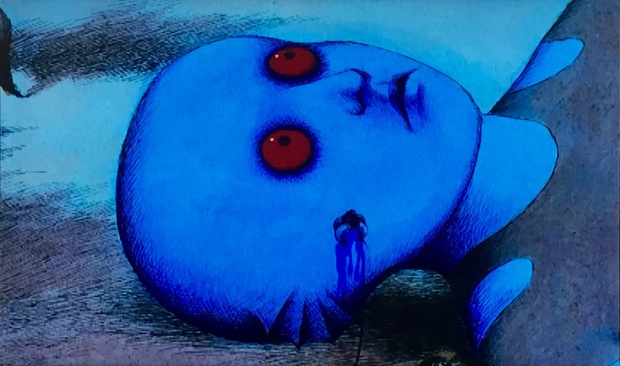 The only good Draag is a dead one, if you are an Om.