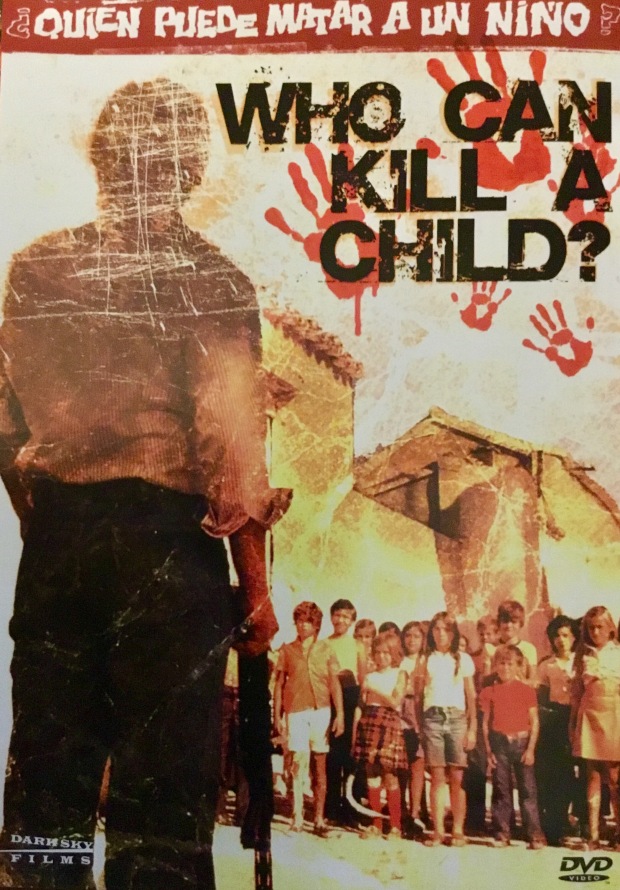 The cover to the Dark Sky Films DVD.

Film: This is one of those films that I have decide to label it as ‘from the To Watch pile’ as honestly, I can’t remember a damned thing about it though I am sure I watched it several years ago, probably when this Dark Sky disc first came out!

The film opens with a horrific recounting of the crimes committed by the Nazis during the Second World War, especially those medical experiments committed upon children, and continues by looking at other horrific scenes of real life cruelty we commit upon each other. This section contains real footage that is stomach churning to look at… especially with the addition of children singing! 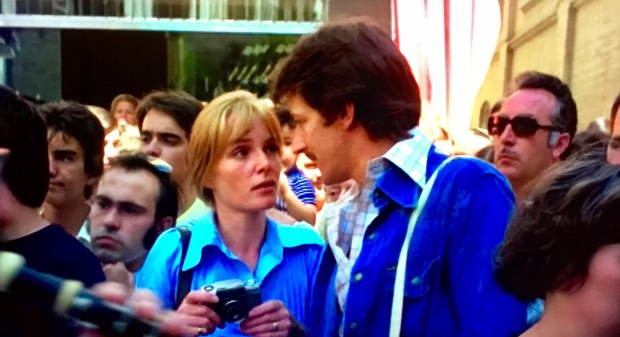 Our heroes, looking like they are lost in Carry On Spain.

From these scenes of real pain and starvation we end upon a beautiful beach where children enjoy the sun until one discovers the body of a young woman, who has been stabbed several times.The ambulance passed a bus containing our protagonists, Tom (Lewis Flander) and his wife, the very pregnant Evelyn (Prunella Ransom), who are on a small holiday without their children, Ritchie and Rosy.

Due to a festival being held in the city, all hotels are fully booked but they manage to find a place to stay for the night before they travel to the secluded Island of Almanzora. They rent a boat to the island, but when they get there they find the island is almost completely abandoned except for children… but what has happened to the adults? Could the children be responsible for their disappearance?

This film was based on the book El Juego de los Niños aka Children’s Game by Juan José Plans, which has been adapted for the cinema twice, first with this film and then again in 2012 as Come Out and Play, which I’ve not seen but is apparently a shot for shot remake of this film, starring Vinessa Shaw and Ebon Moss-Bachrach. The way in which the children change is different form the 1976 novel, but the film’s excuse is still quite effective.

This film is quite a thrilling watch, paced deliberately and with a leading couple who are likeable victims of the circumstances they have found themselves in. It’s also shot quite beautifully with contrasts between the hustle and bustle of mainland life compared to the simple island lifestyle, and it looks like summer.

Our antagonists approach the island…

The heat of Spain is almost palpable, much like how Tobe Hooper did with Texas Chain Saw Massacre: you feel dry and sweaty just watching it.

It’s a film contrary to most horror films as it not only takes place during the day, the perpetrators of the crime are the most beautiful of people, children, and the tourists aren’t the ‘Ugly American’ type who seem to be the usual types to fill tourist-in-danger films. If I am to criticise this film for anything it is the character of Tom who seems to treat his wife like a shrinking violet who must be protected at all costs, instead of alerting her to the dangers they may be in.

This is a great film and certainly worth a watch as it has this strange Day of the Triffids/ 28 Days Later vibe throughout the whole thing.

Format: The reviewed copy of this film is the US Dark Sky Films DVD which runs for approximately 111 minutes and is presented in a clear, not crystal clear, but clear, if not a little artefacty 1.85:1 image and with a choice of 2.0 audio options.

This disc are that one can either watch the film in English (which does has an occasional subtitled Spanish bit when the English tourists meet the locals) or just in Spanish with English subtitles.

Extras: There are three extras on this disc, of which the first two are subtitled in English.

Who Could Shoot A Child which is a featurette interviewing cinematographer José Luis Alcaine. It is a fascinating collection of reflections on the making of the film.

Child Director is a featurette interviewing the director Narciso Ibanez Serrador. He has some interesting comments to make about the film and the script, but his most interesting points are those about the suffering of children and the psychology of violence.

The final extra is a stills gallery which is something I normally hate but this one isn’t just pics from the film but instead is a collection of promotional material from all over the world!

WISIA: It’s a cracking film and I don’t know why I haven’t watched it more often, you better believe it will get watched again… and soon!