One from the re watch pile for Jack Kirby month…
Captain America: The First Avenger (2011) 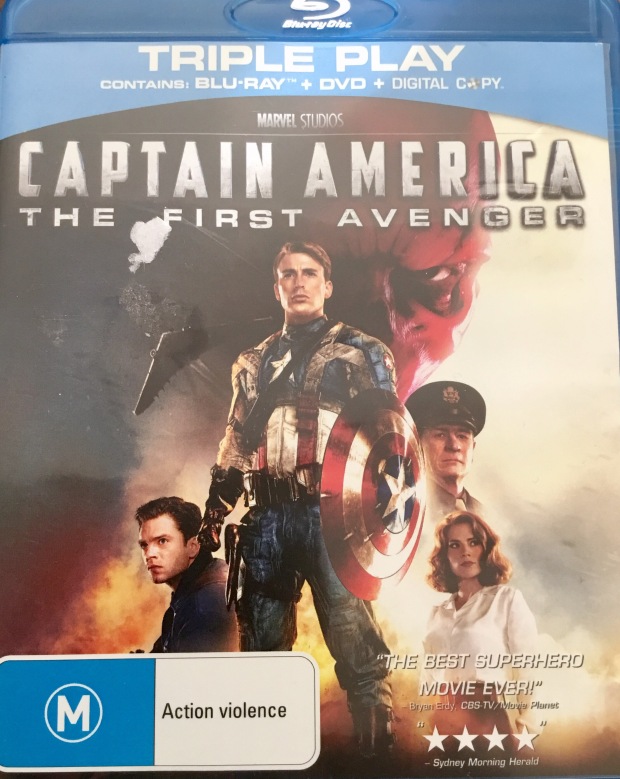 Film: Captain America has always been ‘my’ superhero. When I was a early teen, which is when I really started to collect comics properly (before that I just bought them at random, rather than collect a series consistently), and that first series that I couldn’t do without was Cap’s. I remember clearly that it was issue 262, drawn my Mike Zeck and it had Cap being held aloft by a giant version of himself known as ‘The Ameridroid’. I had a great friend in high school and the two of us were ‘the comic nerds’ though he was an Iron Man guy, whilst I was all about Cap.

He was my friend regardless of his bad taste in heroes.

My father one day took me to Comic Kingdom in Sydney, and bought for me a full second run of Jack Kirby’s Captain America from the 70s (and a full run of Jack Kirby’s The Demon from DC) and I was totally enamoured by how awesome Kirby’s art was and became a lifelong fan. I did have other Kirby comics in my collection, I quickly discovered, and they became the jewels in my comic crown.

So fast forward to about 30 years later, and I hear that a ‘proper’ Captain America film was being made that would be part of a greater collective of a Cinema version of the Marvel Universe, and am stoked that the guy who was cast as Johnny Storm in a substandard Fantastic Four movie previously.

More importantly, I heard it was going to be pretty true to the comic, and the lack of an Italian Red Skull made my heart flutter.

… and boy, was I not disappointed!

The Captain (Chris Evans) is somewhat disappointed in his way effort as an entertainer.

Captain America: The First Avenger tells of a young man Steve Rogers (Chris Evans) during the Second World War who, due to a lack of physical prowess, was rejected to join the army, though he is eventually accepted to join a test program to create the perfect ‘super soldier’.

When he proves himself not in strength or skill, but in mind and heart, he is accepted into the experimental program, overseen by Colonel Phillips (Tommy Lee Jones), Peggy Carter (Hayley Atwell) and scientist Dr. Erskine (Stanley Tucci). He finds that he is not the first to undergo such a procedure, and that a German soldie, Johann Schmidt (Hugo Weaving, who I still think would be an amazing Joker in a Batman film), went through an imperfect version of the process which caused him to become deformed with a red, skull-like visage.

Unfortunately, Dr. Erskine is killed by a German spy during the procedure and when Steve emerges as a muscular heroic figure and pursues him, he kills himself with a cyanide pill. With Erskine dead, Rogers is not used as a soldier, but instead a promoter of war bonds and a part of the war effort entertainment troupe, until he is caught up in a rescue mission which not only reunites him with his childhood friend, Bucky Barnes (Sebastian Stan) but puts him at odds with Schmidt, and his collaborator, Arnim Zola (Toby Jones).

Will Captain America survive his first mission, or will he end up in a plane crash and be frozen for 50 years…?

They nailed the entire creation of Jack Kirby and Joe Simon’s character in this film. The beauty of do a film set in the past is you don’t have to ‘update’ it like they did with Iron Man, who got his chest injuries differently in the comics (well, basically the same, but in a different war) so there is no part really where the comic fan might get a cringe… like the Joker killing Batman’s parents in Tim Burton’s Batman…

They do modernise Bucky though, as the concept of a young boy being sent to war to fight alongside men would have child endangerment groups livid, and let’s face it, the kid sidekick is a terrible idea (sorry Robin, Wonder Girl, Speedy, Aqualad, etc). Any ‘hero’ who puts kids in danger is no hero at all!

The amazing thing is that this film never really falls into the trappings of what could make it a bad movie. Captain America is seen as an icon of good, rather than a pro-America cheerleader, and that is something that could have very easily been mistakenly done. This is due to the excellent writing from Christopher Markus and Stephen McFeely, which never talks down, nor does it feel comic-y: it’s a war movie with a superhero in it! The only time it goes into melodramatic areas is with the Red Skull, which it has to as he is an over-the-top supervillain!

The direction is really good too. Joe Johnson didn’t just set this film in the 40s, sometimes it even is filmed like a movie of that era, and I got bits and pieces of things like Raoul Walsh’s White Heat out of the occasional visual. He didn’t copy scenes, but there is an occasional stylistic emulation, which never becomes parody which is a nice touch.

Anyway, this is a great superhero movie and a pretty good war movie too, and throw in a brief cameo of Doctor Who’s Jenna Coleman just to make the nerd in me jump up and take notice!

Format: This Australian bluray copy of the film runs for approximately 124 minutes and is presented in an impeccable 2.35: 1 image with an astonishing Dolby DTS-HD 7.1.

Extras: Heaps of cool extras on this disc!

Commentary by Director Joe Johnson, Director Of Photography Shelley Johnson and Editor Jeffrey Ford which is a good one, insomuch as it’s informative and conversational.

Marvel One-Shot: A Funny Thing Happened On The Way To Thor’s Hammer is, upon reflection, a tool to prepare us for Coulson’s character becoming a bigger part of the Marvel Cinematic Universe. It’s an entertaining short, in the vein of ‘bully gets his just deserts’ styled YouTube videos.

Next there is a bunch of really interesting featurettes:

Outfitting Cap looks at the entire design process and styling of Cap’s outfit and his shield.

Howling Commandos looks at the actors who played Cap’s platoon, the Howling Commandos, firmly placed in comic lore, though Nick Fury is absent (he was their sergeant in the comics).

Heightened Technology looks at the tech used in the film, which needed to look like ACTUAL WWII technology, but still have a scifi element to it.

Behind the Skull explores the performance by Hugo Weaving and special effects of the Red Skull, Cap’s arch enemy.

The Assembly Begins is, of course, a first look at what would become The Avengers.

Deleted Scenes has 4 deleted scenes which can be watched with a commentary by the previously mention members of the film commentary team (for some reason one doesn’t have the commentary, but you’ll have to deal with it).

There are four trailers: two for the film, one for the video game and one for the Avengers cartoon.

This version of the film also came with the film on DVD and a downloadable digital copy as well.

One thought on “Captain America: The First Avenger (2011) Review”