One from the to watch pile…
Teen Titan: The Judas Contract (2017) 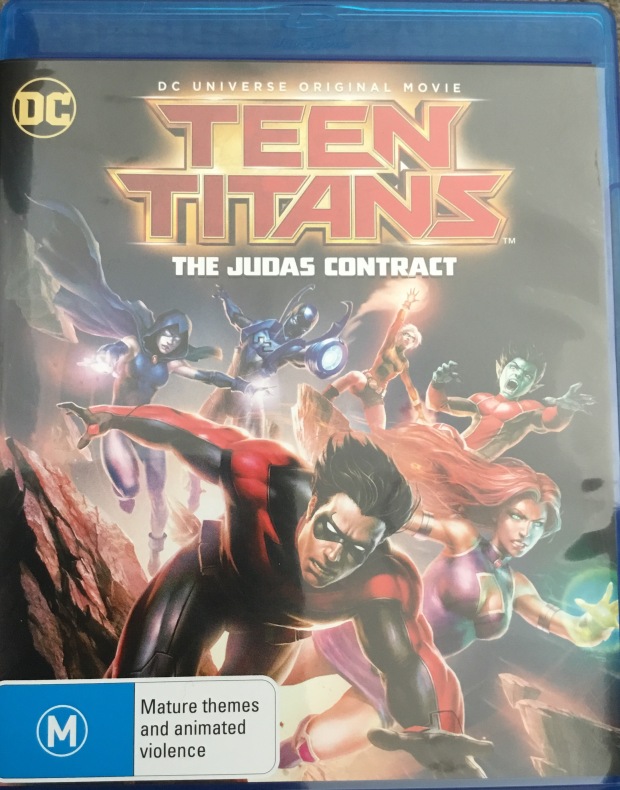 Film: Often in movie circles you’ll hear people talk about how great the Marvel cinematic Universe is, or how DC are trying to copy its success, blah blah blah, but the BEST movies about super heroes are often overlooked.

The DC animated movies started in 2008 with somewhat of a whimper with the not-very-good Batman Gotham Knights, and apart from an occasional misstep, these features have been far superior to, well, ANY cinematic film in my opinion. Why is this? Several reasons…

… and I have to admit as being a lifelong comics fan as a justification of some of these reasons.

The first is that the animated features don’t feel the need to give the origin of every single hero they introduce if it doesn’t move the story along. Does Martian Manhunter’s origin tie into the story that is being told? No? They show what he can do, as the why’s and wherefores are incidental. 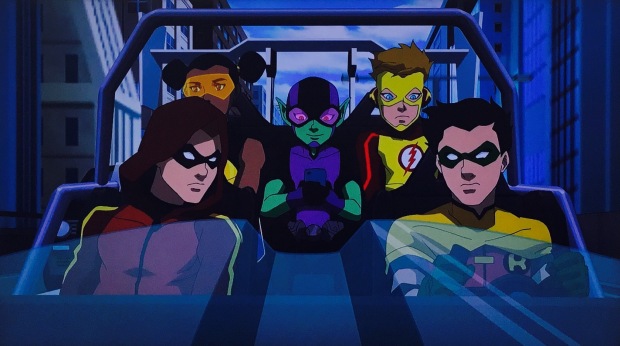 Another is that even though there are a few costume cosmetic changes, in general the costumes of the heroes are similar to the comics. I do appreciate that blue and yellow spandex may not be the greatest look on film, and that cinematic tone may not read it well, but it’s just comforting to see Batman in blue and grey.

The other thing is, and I’ve mentioned it before, is that these film can be watched as a singular film or as part of their various subsets, without the weight of 36 hours of other movies to prop it up. It’s fine to make a film series, but if some of the films don’t really stand on their own, what’s the point?

Another thing is that there is a regularity of cast that don’t need to change due to age or fitness levels. Kevin Conroy has been playing the animated Batman on and off for years!

Basically I wish DC would abandon their live-action universe and concentrate on these, and their TV series’ like Supergirl, Arrow and The Flash, and maybe their video games.

This one is especially special to me as in the early 80s when the two best comics around were Marvel’s The Uncanny X-Men and The New Teen Titans, I was totally in love with both. When Marvel and DC did a crossover with them I almost exploded.

The panel of Cyclops and Robin shaking hands blew my mind!

Anyway, of those early issues of The New Teen Titans, one of the best storylines was The Judas Contract, and apart for a few alterations necessary, such as some Titans roster changes, the plot is very similar.

Our story starts with these stories version of the original Teen Titans: Robin, Speedy, Kid Flash, Bumblebee and Beast Boy, meeting K’oriander, aka Starfire: the future leader of the Titans. We then flash forward to 5 years later (now?) and we meet the current Titans: Starfire, Nightwing (who was the original Robin), the new Robin, Blue Beetle, Raven, Beast Boy (still) and Terra.

A rising threat known as H.I.V.E. and it’s leader Brother Blood are a concern to the Titans, and Nightwing is investigating everything to do with them, but what if one of the Titans is a traitor… working for the assassin, Deathstroke?

As with most of these features, the art direction and story telling is fantastic, and the story moves along at quite the clip. It does vary slightly from the comics due to the aforementioned roster changes, but in essence it tells a great story about teamwork, friendship, Stockholm Syndrome, betrayal and what it takes to be a hero.

The best thing about it is just how dastardly awful Deathstroke is. So many superhero films show the bad guys in, not a positive light, but they certainly seem cooler than the heroes. This film aborts that ideal and Deathstroke is an absolute piece of crap who is totally unlikable, potentially a paedophile and a child beater: in short, a proper villain.

The voice acting in this film was excellent, with special guests like Christina Ricci as Terra, Gregg Henry as Sebastian Blood, Kevin Smith as himself and tragically, Deathstroke was the last role that Miguel Ferrer before he succumbed to cancer.

This was a fantastic film, and I hope another Teen Titans one gets made as the character dynamic makes for great fun, adventurous films.

Format: The reviewed copy of this film was the Australian region B bluray, and is presented in an impressive 1.78:1 image with an amazing DTS-HD 5.1audio.

Extras: As usual, a great bunch of extras appears on this disc:

Titanic Minds: Reuniting Wolfman and Pérez. So I totally fanboyed out when I saw this extra as these guys made amazing comics when they were making New Teen Titans comics. This is a small round table with writer Marv Wolfman and artist George Pérez, two absolute legends of comic history who rebooted the Teen Titans from being a moderately successful team of sidekicks into a group of heroes to rival the justice League, and it became the number 1 comic for a time. These extras get 5 stars JUST for how historically relevant this is.

Villain Rising: Deathstroke explores the history of the character with comments from Wolfman, Pérez and DC Entertainment’s Mike Carlin.

There are three ‘Sneak Peaks’ at other DC Animated films, the forthcoming Batman and Harley Quinn, and previous entries, Superman/ Batman: Public Enemies and Justice League: The Flashpoint Paradox.

There is also two episodes of the Teen Titans cartoon, ‘Terra’ and ‘Titans Rising’.

Finally we have a bunch of trailers for the DC All Access App, Justice League Dark, The Jetsons &WED: Robo-Wrestlemania and the video game, Injustice 2. The disc also opens with a trailer for the incoming Wonder Woman movie starring Gal Gadot! 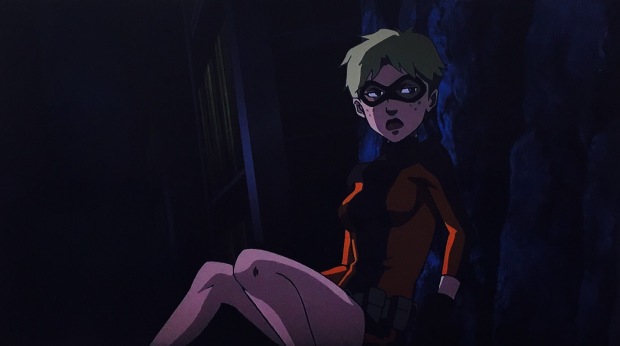