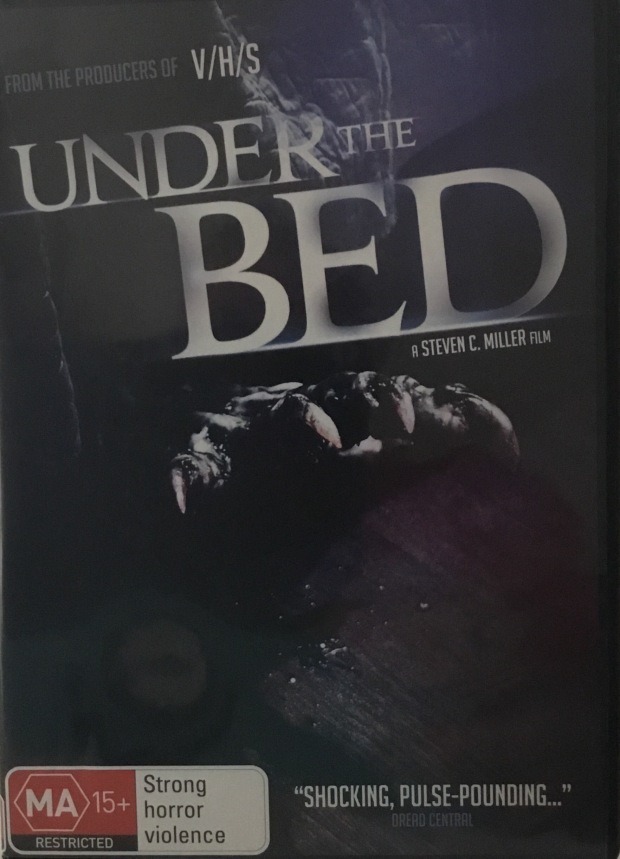 Film: Sometimes I’ll pick up a film because of the price, and in this case, I decided that $6.98 was a fair price for a horror movie that runs for 87 minutes… that’s barely 8 cents per minute of entertainment! That’s a damn great deal! Especially when you consider it’s directed by Steven C. Miller, who did the remake of Silent Night and written by Eric Stolze… no, not Eric Stoltz: this is a different guy. This guy wrote Late Phases, he didn’t star in Mask.

This movie is quite a simple one: after his mother died, Neal (Jonny Weston) was sent away to be home schooled by his aunt and go through some therapy. Our tale starts with his return to the old homestead when he is greeted by his dad, Terry (Peter Holden), his new step-mother Angela (Musetta Vander)and his younger brother, Paulie (Gattlin Griffith).

Things aren’t quite right at home though. The reason Neal was sent away was his mother died in a house fire because she believed his horrible secret: he’s being haunted by a creature that is living under his bed, and now the thing has found that Neal has a brother!

So now it’s two brothers against one thing, but can the two of them be victorious over the thing under the Bed?

The only problem I had with this film is the flat out reason that this film was like a remake of The Boogeyman with a few tweaks. From the ‘return of the prodigal son’ to the ‘thing that lives in the darkness’ and ‘the cure girl next door whose interested in the male lead’… you could possible make a bingo sheet from plot points of Boogeyman, and use it for this film. It also suffers from not wanting to give away too much, and ultimately just not telling a complete story.

Unfortunately in a thing which exists to convey story, that’s a pretty big problem. The shame of the situation is that the acting is pretty good, the direction is fine and unlike The Boogeyman, this has no problem spreading the blood and gore around… there is some real grisly deaths and a practical monster that may be a little generic, but you see just enough of it for it to work.

Also I have a new cinema crush in the form of Musetta Vander: she’s like a more busty, mumsy version of Jeri Ryan/ Seven of Nine from Star Trek Voyager.

Visually great but with real problems in the storyline department, this movie ultimately fails, and I possibly didn’t quite get my 8 cents per minutes worth.

Format: The reviewed copy of this film was the Australian region 4 DVD which the DVD cover claims runs for approximately 87 minutes. It doesn’t, it runs for about 83 minutes, and 3 minutes of that is just end credits. This film image is presented in 2.40:1 and is crisp, though it is quite a dark film, so I suggest you watch it in a completely darkened room, and the audio is an an equivalently good Dolby Digital 5.1.

Extras: You want extras? Well tough: there’s none, but what do ya want for under $7?

WISIA: In short, probably no.