On our last review of Zombruary, we have one from the re watch pile…
Dellamorte Dellamore aka The Cemetery Man (1994) 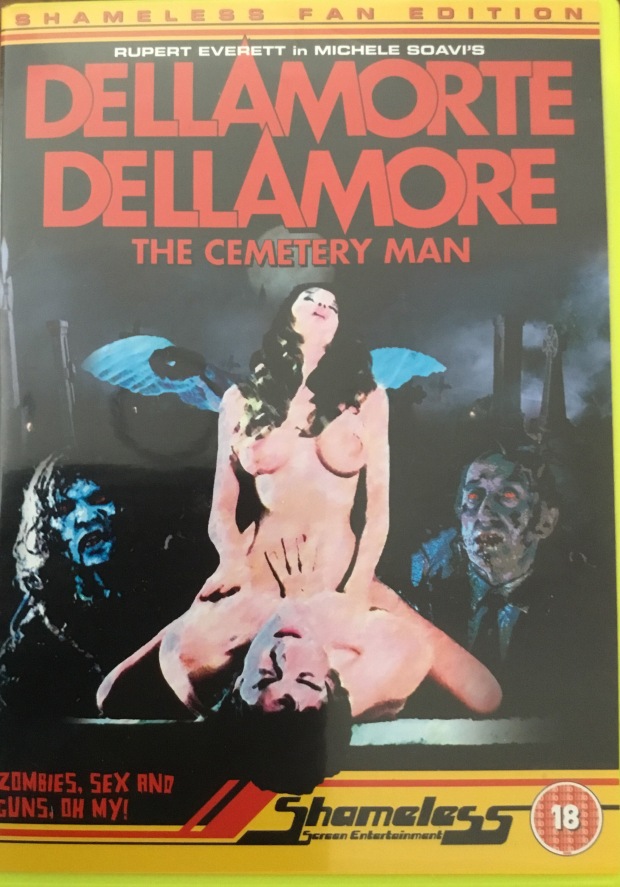 Film: Shameless Screen Entertainment tricked me. Being a completist, I can’t help but grab every release they do as they have numbers clearly shown on the spine of each DVD or bluray they release.

But I have to admit my chagrin may be not as severe as it could be, as through the perpetual purchases of their product, I have watched some films that I possible would never had been exposed to the likes of Who Watched Her Die or Torso.

This however is a film I would have grabbed even if I wasn’t a nutjob collector. This film has always been of interest to me for several reasons: it’s based on the comic Dylan Dog and I’m a sucker for comic movies, it stars Anna Falchi who is just exquisite (and has an amazing body which is shown off several times in this film), and is directed by Michele Soavi, who also directed Stagefright and The Church, two films I love!

Our story tells of gravedigger, Francesco Dellamorte (Rupert Everett) who doesn’t just bury the dead, but also has the job at a graveyard of re-burying the Dead who have returned to life, or ‘returners’ as he calls them along with his sidekick/ employee Gnaghi (François Hadji-Lazaro). 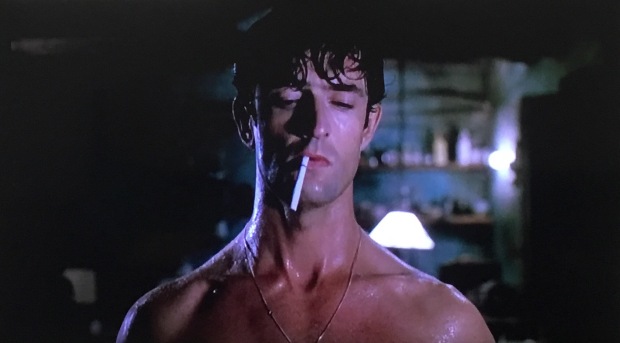 Whilst at a gravesite one day he sees a widow, referred to as ‘She’ (Anna Falchi), who is burying her husband, and he decides she is the most beautiful living person he has ever seen, and decides he needs to pursue her.

He eventually lands his prize, but she dies of fright after seeing her returned deceased husband, Dellamorte’s life starts to decline… and perhaps his mental stability too, after he is visited by death itself, and doppelgänger of his beloved….

It’s a great movie, with great looking zombies and a real different way of looking at the ‘zombie problem’ and it’s full of black comedy and with a nihilistic ending which is a surprising flip in tone, and is entertaining throughout.

Format: This U.K. Release from Shameless Screen Entertainment on DVD runs for approximately 103 minutes and is presented with an OK, 16:9 image with a similar Dolby Digital 2.0 soundtrack. The audio is available in English or Italian with English subtitles. It basicLly a good image, but has a touch of pixelation here and there and the colours sometimes run flat.

Extras: The disc opens with reviews for other Shameless Screen Entertainment releases Four Flies on Grey Velvet and Cannibal Holocaust.

Other extras include a trailer, a gallery (which is a usual pretty boring piece, only 15 photos from Alan Jones’ personal collection, some behind the scenes shots and a few pics of the script and a poster), there is a Shameless Trailer Park which features trailers for other Shameless releases Venus in Furs, The Frightened Woman, Who Saw Her Die, The Designated Victim, Oasis of Fear, Baba Yaga, Footprints on the Moon, Satan’s Baby Doll, The Beast in Space, The Strange Vice of Mrs Watch, Almost Human and Don’t Torture a Duckling.

There is also a fantastic commentary by Soavi and writer Gianni Romoli which really gets into the nuts and bolts of the making of the film, though it is , as expected, in Italian with English subtitles.

Journalist Alan Jones has also provided an interesting personal account of the Ma king of the film in an accompanying booklet.

WISIA: It’s a gem. You’ll watch it again and again!

Dellamorte Dellamore: a Zombie’s Guide to the Scout Apocalypse