Film: As a collector of stuff, occasionally I am captured by that thing called ‘The Bargain’. We have all seen them: buy two get one free (even when we only want two), ten DVDs for 20 dollars at a closing video store (you can find seven you want but force yourself up to the ten for the ‘value’)… Hell, even as I write this I just bought an extra vinyl record from an eBay store as the price of postage for 2 records was the same as 3!

I am as easily manipulated as everyone else!

This film made its way to my collection via one of those ‘buy ten’ at a closing video store, which is why you may have noticed the ‘horror’ and ‘$3 weekly’ stickers on the photo above.

This film was directed and co-written by Sean Tretta, who also directed The Prometheus Project and The Great American Snuff Film which was co-written by Tretta’s co-writer here, Mike Marsh.

Our film starts with a backstory of a family who were killed in 1982, and how a paranormal investigator, Carter Simms (Patti Tindall) 20 years later met her final destination at whilst investigating the haunting that had been reported over the former 20 years.

Death of a Ghost Hunter: Patti Tindall as Carter

Carter has been employed by the nephew of the murdered couple, Seth (Gordon Clark) to find out what is going in the house, and accompanying Carter is a videographer, Colin (Mike Marsh), journalist Yvette (Davina Joy) and local church representative Mary (Lindsay Page). The four of them need to spend three nights in the house and perform a full investigation, but will they all get out alive? I mean, obviously the title suggests that at least Carter doesn’t but… will the rest of them?!?

This film won best screenplay at the New York City Horror Film Festival and mostly, except for a few dumb jokes and some dumb lines (whilst looking through a window into a structure, one of the characters declares ‘there’s a room in there’… yeah, there WOULD be), it is an interesting story. The problem is the execution.

First, those ‘jokes’ I mentioned are delivered so terribly that they fall totally flat. The reason the jokes are delivered so badly is that other than Patti Tindall, most of the cast are at best, of a high school drama club video standard. Even though lines are ‘delivered’, it’s not supposed to be like a pizza. A little passion or effort could go into it!

Death of a Ghost Hunter: Lindsay Page as Mary

Secondly, it commits a crime that I can’t forgive. I hate ‘found footage’, shaky cam rubbish, and some of this is done in such a style. The scenes done in this way are awkward and hokey, and even part of the script pulls the piss out of The Blair Witch Project, which doesn’t sit well with the rest of the story. Weirdly, memories and flashbacks are also told in weird ‘old film’ Robert Rodriguez Grindhouse styled, but the memories weren’t films… so why are they made to look like old film stock? If it were like Sinister where the crimes were filmed I’d get it, but this makes no sense at all.

The final issue is the way it was filmed. I mentioned ‘high school drama club’ and the direction/ editing is mostly of a similar level. At times I can’t figure out if some of the photographic decisions were made for artistic reasons or were accidents that they decided to leave in. The mastering of the DVD doesn’t do any of the cinematography any favours either.

All in all it’s a great story, executed poorly, which is a shame. 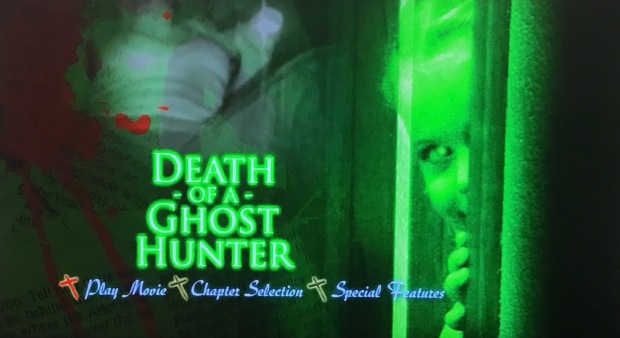 Format: This review was performed whilst watching the Australian, region 4 PAL DVD which runs for approximately 105 minutes… though it does at times feel like 21,005 minutes (the first 20 minutes feel like they go for an hour themselves). The film is presented in 16×9 widescreen image which is of a fairly average quality, not artefact laden, just grainy and not very sharp. The soundtrack, presented in Dolby Digital 2.0 is fine though.

Extras: Only two extras on this disc: a few deleted scenes, which are introduced by the director and the trailer. As usual, the film is better without the scenes shown here and the addition of the director’s comments are interesting (there’s always a reason why these things get cut), and the trailer does the job.

WISIA: Nup, and actually, i wish I hadn’t seen it once!

Death of a Ghost Hunter: a G-G-G-Ghost!!